Let me give it to you straight: I have a love/hate relationship with Ralph's.  I inevitably end up pissed beyond belief while walking through the store.  Most of their prices are obscene.  This is not an exaggeration.  There are products in the store that are easily 3 or 4 dollars more than everywhere else.  I think it's completely bogus to charge people so much for food.  So, I mostly hate the place.

Then, it calls to me like a siren in the middle of the night.  Actually, last night it called to Era.  I went along because late night shopping is one of my favorite things to do.  Here's a budget tip: shop late night or early morning.  Here are a few reasons why:

1. Less people equals less traffic.
2. Less traffic equals more time to thoroughly look at items and see what's on sale.
3. These are often the times that new things are stocked and stuff gets added to clearance.  Score!

My love of grocery clearance is never changing.  Sometimes we hit the jackpot and get faux meats for cheap. Here's what remains from the haul we got last month:

Last night, there was nothing in the way of veggie meats.  However, the freezer section was looking AWESOME!  There was a lot of 2 for $5 going on.  I think the pot pie was $2.50.  I know the eggplant stuff was for sure.  The vegan drumsticks...I just wanted those suckas.  I wrote my name on the eggplant stuff because Era got the vegetarian version and I didn't want him to accidentally take mine in the morning.  Hee hee.

A quick review on the Yours Truly.  The chocolate shell and cookie crumbs are seriously good.  Really dark and not too, too sweet.  The vanilla ice cream is almost caramel-flavored.  Then, I got to the cone.  It's a soggy, chewy, hot mess!  C'mon, Tofutti!  I was totally feeling the vibe of being a middle schooler inhaling drumsticks on the daily when I got to that cone.  No crunch at all!  Even that last bit of cone with the chocolate is supposed to be the best part, but I was super underwhelmed.  I love the new direction veganism is going (and I'd still buy these), but I really hope they do something about the cone.  Next, I have to try the flower ice cream that I've heard so much about.

Back to the issue.  My favorite thing about clearance grocery shopping is the bread.  Wanna watch the price of artisinal bread drop by 66 percent?  Go visit the clearance of a store with a bakery.

The sourdough bread was $2 marked down from $6!  The baguettes were only 99 cents!  The bread is at a perfect state for making French toast or using in dressing/stuffing.  And super great for toasting!  All it takes to find bread this cheap is a look through ingredients and a mean eye for that clearance cart.

And with all the money you save on deals, you might be able to try something completely new and different.  On the Ralph's trip we did last month I got some Kosher chips.  I really wasn't feeling them because they were too crunchy for my teeth and the flavor was lacking.  They were still pretty adorable though. 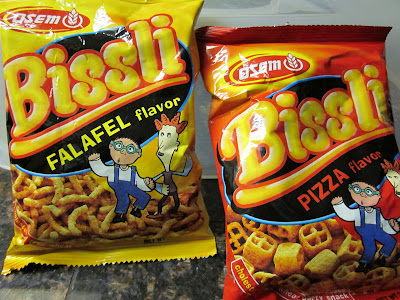 Hopefully, I've planted the seed to wander around stores in the wee hours of the night!  It's great fun, and you might even find a bargain or two!

Tomorrow...I will be veganizing an omni monstrosity of EPIC proportions.  Muahahahahaha.
Posted by Monique a.k.a. Mo at 12:27 PM

We really ought to get together and bargain shop. or compare our hauls from our respective haunts.

Awesome, I love a good bargain! I really liked those tofu pups the one time I tried them & the ice cream drumsticks look great.

Also, I seriously hope you are veganizing that horrific Thanksgiving cake dealio!

Ooh you really scored!! Awesome! How I love Amy's Pot Pie...yes I do.

I tried the Bissli falafel snack things recently, too. They're underwhelming.

I need to do a care package swap with u I never saw all these products...
OMG those falafel snacks...
I am craving an icecream with some shell topping.
I would love to go in the store and get this..:(

Oh my, Mo, you really are a super shopper! I miss being able to shop at 2 a.m.

I'd like to go shopping with you, Mo. You have a real knack for scoping out bargains.

Awesome deals there!! I sometimes see stuff for super-sale at the Dillon's in town (part of the sale Kroger family chain), but nothing like that. I DID get a bag of cornmeal on a great sale in Sept (http://yourmomsavegan.blogspot.com/2010/09/cornbread.html). Pretty happy about that:)

must. find. falafel. snax. zomg! you are the queen of bargain shopping, Mo! so awesome! score on the breads, the faux meatsies, the snacks....everything! i am rarely up late, but i am one crazy morning bird (i get up at 4 every morning) and i puffy heart shopping when the stores just open up for all the reasons you mention. i just watched your vlog - and are the people who are stealing all of our unsweetened plain almond breeze also stealing it off of your shelves?! damn! >:( makes me frustrated that we have trouble finding it a lot of times as well. the unsweetened vanilla actually isn't too sweet and we have used it in smashed taters and it's not noticable with a whole bunch o' garlic to kinda hide it. i'm very excited about tomorrow's post about you taking on and veganizing an omni monstrosity of those proportions!!!! squeeeeeeeeeee!

What a good deal!

Falafel chips? That is very odd.

When my oldest son was a baby he did not like to sleep, so I would load him up in the car and go grocery shopping at 3 am quite often. People must have thought I was crazy!

I love bargain shopping! It's so satisfying to get something cheaper than usual. And falafel chips, brilliant concept. Too bad they lacked in flavour :(

Regardless of the price, I want those drumsticks for breakfast.

Such good deals, once again! :) I always love to read about (drool over?) your grocery finds - I wish we had such selection of vegan items in Denmark, not to even mention such bargains.

I love late night shopping too, it always makes me feel a little crazy because of the weird atmosphere and bright lights.

And thanks for reminding me about the last bite of the drumstick. NOT.

I love late night shopping, too. Especially on weekends!

I found those Tofutti cones in a tiny town on Cape Breton Island, Nova Scotia. I was kind of disappointed by the soggy cone, too, but it didn't stop me from eating the whole box. Hey, it was vacation!

contrary to the popular jewish stereotype, i'm a terrible bargain shopper when it comes to food. my husband is the coupon and clearance king.

i can't think about ralph's without thinking about the big lebowski.

I love your bargain posts, mo! so awesome. We don't really have any good bargain spots in Santa Cruz... but once, many years ago, I did get two frozen tofurkey meals for $.99 each. I was so stoked.

I'm sad the falafel crackers weren't yummy... it sounds like such a great idea.

In my best Joker voice, "where does such get such wonderful [buys]". No seriously, I need to know how you do this. Right place at the right time, always, I love it.