VeganMoFo IV: Just One of Them Days

Today was crazy weird.  I switched back and forth between three different things to blog about.  I finally settled for another edition of Eating Around the World!  Today's entry is brought to you by the country of Georgia.  I made a dish known as khachapuri, which is this cheese bread appetizer thingy.  It was ZOMG amazing!  I mean, have we met?  I'm totally in love with all things vegan cheese related.  Never got into cheese as an omni.  So here we go...

Apparently, khachapuri comes in different shapes and there are many different techniques.  Some are rounds stuffed with cheese.  Others take the stuffed rounds and top that with more cheese.  Still, others add potatoes!  The cutest one of all is the boat-shaped khachapuri!  They aren't extremely hard to shape, but I definitely need practice.

Traditionally, this version has a cracked egg on top and is served with butter.  I used a small pat of Earth Balance, but I don't think it was entirely necessary because this was balls-to-the-wall greatness on its own!  I served it with a salad because of my extreme sugar crash from yesterday's Pop-Tart extraVEGANza.  Yeah, I did just write that.  I used plums and walnuts because that seemed to be a common theme in many of the Georgian dishes I saw.

So...a recipe?  This isn't a recipe exactly.  It's more of a crazy marriage of two books.  So, here's the idea.

Make the pizza dough according to directions.  After the first rise, preheat the oven to 450 degrees, and divide the dough into four balls.  Place one of the balls on a floured surface, covering the rest until use.  Now roll out the dough into a long oval shape.  Place on a greased cookie sheet and repeat with a second piece of dough.  Cover the rolled out dough and let it rest.

While the dough rested, I made the cashew ricotta.  Easy peasy, just throw in some fresh cilantro.

When the oven is ready, spread about 1/4 cup onto each of the rolled out pieces of dough.  Make sure to leave about a 1/2 inch border.  Now roll the sides of the dough in toward the filling, creating a barrier.  For the top and bottom, crimp the edges like the front and back end of a boat.  Sprinkle with Daiya.

Place in oven and bake on bottom rack for 10 minutes, or until golden brown.  Roll out the remaining two pieces of dough and let them rest while the others are baking.  Repeat the same filling process with the final two as you did with the first ones.

Tomorrow, I have a very nerdy dinner and a movie MoFo theme planned.  I attempted to have it ready today, but I consider my first attempt a fail for a few reasons.  So, here's a hint of what to expect tomorrow.  Well, it's a picture of the failed version anyway. :) 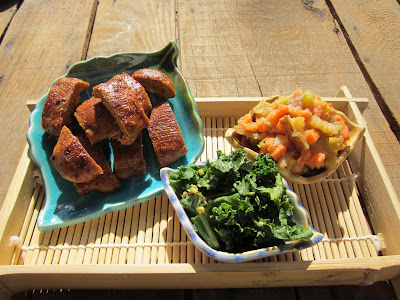 * Make sure if you are making bread from 500 Vegan Recipes to use the sprinkle and scrape flour method instead of the scoop and scrape.
Posted by Monique a.k.a. Mo at 4:28 PM

That's the biggest pile of carb cheese carb that I've ever seen. it puts my pedestrian grilled cheese I had tonight to shame.

And it's served as an appetizer! I had half of one with that salad and just about died...of deliciousness and fullness.

You are killing me.

and this is why being xgfx sucks balls.

sweet jeebus, Mo! that. is. magical. when you said, "cheese bread appetizer thingy" my response was an immediate "f*ck yeah!". words cannot describe how awesome your khachapuri looks. :) also, squeeeeeeeeeeee on the dinner and a movie MoFo theme tomorrow! i'm mucho excitedfaced!

That does sound and look insanely delicious! I'll have to keep these on my short list of things to make. asap.

Oh my god that cheese thing looks amazing, I want it now even though it's 2.30 in the morning & I should be sleeping!

That is lovely! Did they use goat cheese in the original recipe? I am intrigued. Plums and walnuts are a great combo!

I'm looking foward to your dinner/movie theme. I'm thinking it has some sort of southern theme!

The recipe that I saw was a mixture of yogurt, gruyere, and something else. I can't exactly remember.

The cheese-stuffed tart looks substantial, but I'm intrigued by the "fail." It looks so good that I can't wait to see what the "success" looks like!

So looking foward to your movie and food theme.

I love extraVEGANza and the your boat shape is awesome. I can only imagine the cheesiliciousness of it all. Oh yeah!

OMG I have to make that!

whoa... it's a thing of total beauty! I have a Georgian night coming up on my horizon too... maybe Georgian food is worthy of much more investigation! One thing this mofo is teaching me - there is so much delicious food out there, just waiting to be cooked and enjoyed!

Yay! I get all giggly and silly when I see the E.A.T World banner pop up in google reader! :D

Carbs and cheeze, that's what dreams are made of! I love the purdy shape, it almost looks like a candy wrap!

Fail? Where? I don't see it! I'm looking forward to your nerdy dinner and a movie post! :)

I'm always happy to learn about new cheesy vegan pastries- This looks awesome! Cashew ricotta sounds like something I can't live without, so I must go make a batch asap.

Yes! Cashew ricotta is absolutely amazing. I've even made a sweetened version and put it in pancakes. Very good!

That looks fantastic! Looks like a boat to me. I wouldn't mind having it with some soup.

I've been wanting to makie this dish for a while, and you have just spurred me on further.

zomg is right! I just ate dinner and I could totally still eat one of what you made. I'm in love with that region's cuisine- some of the best food I've ever had was when I was in Armenia.

My mouth just dropped when I saw that. Wow, just...wow.

That sounds and looks so good!

that pastry cheeze thingy reminds me of something they serve in a turkish restaurant. i just can't recall the name of it. knowing my luck, i'll recall the name in my sleep and mr. j will think i'm having an affair or something. the turkish one is usually filled with meat and cheese.

I looks SO good. I wonder if I could gleegan this? I doubt it but I can cream about it! :D

Sorry about your fail although that tray of food looks like success to me!

I have been waiting forever for someone to veganise Khachapuri! I used to live near a Georgian restaurant when I lived in Moscow and I ate these constantly. I love you.