Have a Safe and Happy New Year

I just wanted to wish everybody a spectacular New Year's Eve.  2012 is going to bring a whole lotta awesomeness on this blog.  I basically have all of January to catch up in the blogging world.  I have a few reviews and some giveaways planned.  Plus, more recipes.  So excited.

And I feel like I'm obligated to show what we had for Christmas, because I totally forgot to.  We basically spent the past week lounging around and eating way too many tamales.  For brunch we had sweet potato-pumpkin cinnamon rolls w/ maple cream cheese glaze, Spanish omelet from VWAV w/ romesco sauce, and sauteed spinach and chorizo (adapted from Vegan Brunch w/ Viva Vegan chorizo).

Overall, this year has been incredibly pleasant for me.  I read a lot.  I wrote a lot.  I took a chance on something and almost succeeded, but the real win is that I didn't give up.  Vida Vegan Con was everything I dreamed it would be.  I went back to school (and straight owned my classes).  I learned a lot and struggled a bit.  Next year is gonna be even more epic.  I can feel it.

On Saturday, Era and I threw our first official Festivus since moving to California.  I was slightly worried because the two other parties we attempted, resulted in practically nobody showing up.  This party, however, was epic.  Dancing!  Drinking!  Food!  Fun!  So, I'd like to share with you how I did it.

Planning.  This is the key to any successful party.  I plotted out the menu.  I drew sketches so I knew where I wanted food to go.  I also decided what food would go in a certain dish.  You don't have to be as crazy as me, though.

Know your guests' drinking habits.  Back home, my friends were all about liquor and Era's friends were about beer.  We make sure to have plenty of both on hand.  However, always go light on the beer because people WILL show up with beer.  Save yourself some money.  We started out with maybe 20 beers, and I don't even know how many bottles I recycled.  Also, treat your designated drivers and non-drinkers with respect.  Make sure to have plenty of juice and water.  This year, thanks to the PPK, I had a cider station.  It was a huge success!

Every room or area serves a different purpose.  The formal living room was the dance floor.  Dining room had most of the food.  Kitchen had the cider station, hot food, chips, and salsa.  Living room had pretzels, nuts, chocolates, and holiday movies.  Back yard was the smoking section.

Have a menu that kills.  I made the appetizers center around cheese and crackers.  We were in mixed company, but everything was vegan except a small tray of dairy cheese, some eggnog, and Era brought some chocolates (there were also vegan versions of all of these).  I made the almond feta from Vegetarian Times.  I also set out Wayfare's hickory cheddar spread.  I also had a tray of pickles, grapes, olives, nuts, and apricots.  Plus, I made some olive salad, salsas, and a spread of Indian food.  Desserts were rice krispie treats, peanut butter fudge, gingerbread cupcakes from VCTOTW, and chocolate chip chai shortbread from VCIYCJ. 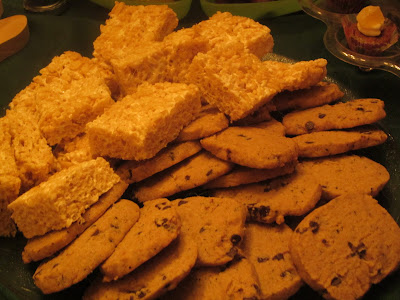 Have fun.  This is the most important thing.  Dance.  Drink.  Relax.  Talk to guests.  The best time is when you go from host to partygoer.

Make sure to get a pole.  Trust me when I say that Home Depot is your best friend.  Do not pay $30 online for a Festivus pole when you can buy something similar for less than $10.

I should be blogging again for Christmas, so see you soon!  Have a festive holiday season!
Posted by Monique a.k.a. Mo at 10:49 AM 6 comments: