I love mini stuff!  It's so adorable and really allows you to taste something without overindulging.  So the food doesn't weigh you down.  I'm thinking I will definitely do this for Thanksgiving this year.  I mean, after day two of cornbread stuffing I'm ready to never eat the stuff again until next year anyway.  Plus, all of the food was surprisingly filling. 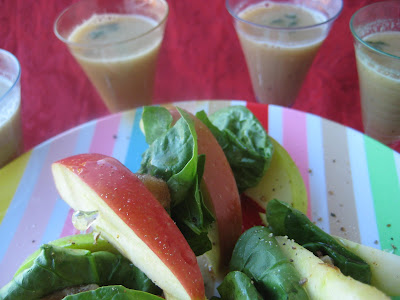 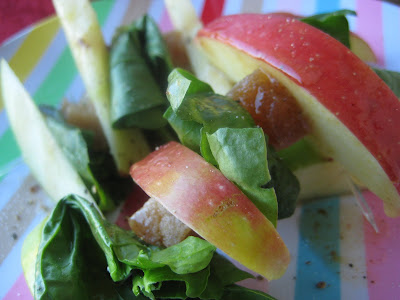 The soup was from Vegan with a Vengeance.  It was ridiculously easy to make and super delicious.  The salad was a slight adaptation of a Kittee MoFo entry from last year.  I used spinach leaves for the skewers and left out the apple mint. 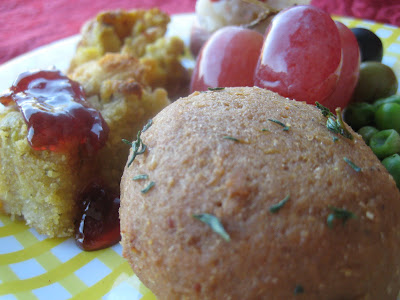 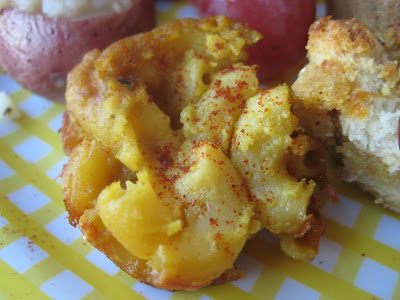 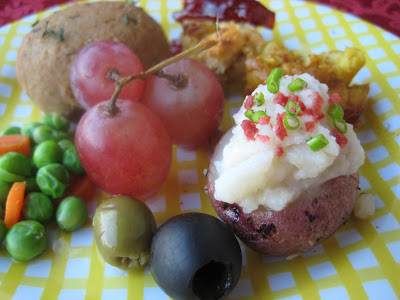 Okay.  The seitan turkey meatballs did not turn out as great as I imagined.  I have to rework them because they were too bread-like.  The stuffing was good, though.

Macaroni bites are ridiculously easy to make.  I used Jess' macaroni recipe (minus the optional veggies and breadcrumbs) and a mini muffin pan.  They are little bites of creamy deliciousness.

The mini potatoes were very loosely based on this Ray Ray recipe.  However, I just did my own thing with the innards.

So, back to the stuffing.  I came up with the recipe by starting with a basic outline and doing some research of other recipes.  It tastes similar to my mom's so I'm happy.  The cornbread recipe is adapted from Veganomicon's.  Except I like my cornbread sweet because that's what I grew up on.  If you don't, you might want to half the sugar.

Preheat oven to 375 degrees. Grease a 9X9 pan with nonstick spray. Set Aside.

Add cornbread, bread, sage, and thyme to a large mixing bowl. In a large skillet over medium high heat, melt the margarine. Sautee the onion and celery until softened. Add to the bowl with the remaining ingredients. Mix thoroughly. Slowly add the vegetable broth in until the mixture is moistened. It should be wet enough to stick together but dry enough to be held in your hands. Now add salt and pepper to taste.

Pour mixture into casserole dish and bake for 35 minutes or until the top is slightly browned and dry to the touch.  For bites, let it cool for a bit then cut into small 1 inch squares.

Combine non-dairy milk and vinegar. Set aside. Combine cornmeal, flour, sugar, baking powder, salt, and oil in a mixing bowl. Mix in the almond milk and vinegar mixture. Pour into the cake pan.

Bake for 20 minutes or until a knife inserted in the middle comes out clean. 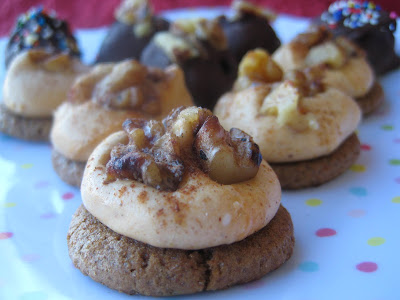 These pumpkin cheesecake bites are adapted from My Sweet Vegan's Mini Icebox Cheesecake.  I love these for two reasons.  1) Making a whole vegan cheesecake is expensive!  This is not a 15 dollar cheesecake, but it's oh so good.  2) My Aunt Evelyn is pretty much known for her no bake cheesecake.  Cooked cheesecake has been dead to me since I was 7.

Blend cream cheese, sugar, pumpkin puree, vanilla, and spices in a food processor until smooth.  Spoon into a pastry bag or freezer bag (if your piping tube melted in the great churro frying incident of '09) and refrigerate until firm enough to pipe.  Meanwhile set up your gingersnaps (or phyllo).  They are going to be the crust for these bites.  Once the filling is firm enough, pipe onto the crust.  Place candied nuts or crystallized ginger on top and sprinkle with cinnamon.  Place in the freezer.  I find I like these best right out of the freezer.  They don't get firm or anything.  Instead, it's like eating cheesecake ice cream or something.

How easy is that?!  I'm telling you: mini Thanksgiving is where it's at!  Two turntables and a microphooooone.
Posted by Monique a.k.a. Mo at 7:57 PM

Jonathan is impressed with your mini-thanksgiving. I think he waits all year for this holiday - his world pretty much revolves around salt, fried stuff, starches, and anything with gravy.

Explain more about the macaroni bites please?! You bake macaroni in a mini muffin pan? This is fascinatingly wonderful and I love it.

I love the idea of an all-mini Thanksgiving menu. Such an awesome concept. Everything looks so cute and delicious, too!

Melissa-Yes! I just sprayed the pan with oil and added the macaroni. I made sure to leave some of the cheesy sauce to put on top. When I made them yesterday they looked like little mac and cheese muffins. They really are awesome.

oooooh - yum! this is most fantastical! i love the idea of a mini thanksgiving - it sounds awesome in every way.

can you believe i've never had cornbread stuffing?! i think i need to - and i've gotta make myself some gluten-free macaroni bites. mmmmmm! sorry the meatlessballs were a bit disappointing - they look most scrumptious, and your apple salad with spinach and candied ginger skewers look amazing! thanks so much for all the recipes!

Thanks! I may have to dedicate the time between now and thanksgiving finding and perfecting the perfect mac and cheese recipe, just so I can do this. :D

I love your mini Thanksgiving! I would have never thought of doing soup shooters, but now it seems like a great idea. I am so used to overeating at the holidays and being way too full to anything productive, maybe if I made things mini that wouldn't happen!

Yummy!!! THis will be our first vegan Thanksgiving.. So I am compiling a list of recipes.. thanks!
Debra @ Vegan Family Style
ps- don't forget about the giveaway on my blog

SO bookmarked the cheesecake bites recipe for Thanksgiving.

okay, the mini stuff is SO FREAKING AWESOME. love it all. i really like the idea of using a gingersnap for the mini pumpkin pies!

this was a very inspiring post. i love little food.

Oh my stars...I'm drooling. I don't want to cook this. I just want to eat it! How much is airfare to Coachella?

Okay...so I DID try to make the macaroni & cheese bites tonight. I followed Jess's recipe, but mine doesn't look as good as tasty as yours. Hmmm. Could be partially because I forgot you skipped the bread crumbs. Whatever the case, vegan Mac & Cheese is a dish I simply can't pull together yet. Sigh.

Faith, don't give up! There are tons of recipes. I find that I never add bread crumbs because it makes it too dry. Especially for the bites to form. Did they taste good at least? That's the main thing. :)

I am impressed! I love your mini-Thanksgiving idea. I love Thanksgiving food, but you're right, after a week of all that heavy food it's just too much.

Holy crap! I love anything mini... this is such an awesome post. And the cheesecake bites... oh man.

Nicely played, Mo.
I love this idea too, why get so stuffed on Thanksgiving? This way you can sample a lot of stuff without feeling like crap. I especially loved your salad skewer idea and the wee mini cheezecake bites. Awesome. About the mac n cheeze bites, how the hell do you get them out of the tins? Also, I would like to hear more about the great churro burning event, that sounds like it would have been cool to watch live.

I am getting no vegan love on thanksgiving day this year, but instead i'll be attending two vegan tgiving type potlucks, one tomorrow and one closer to the day. i am gonna make some caramelized shallots, my mom's stewed fruit compote and i was gonna try a Gillette of some sort, too. but maybe not? i like you wee idea better, so i need to ponder on that a bit more.
xo
kittee

Kittee, they actually popped right out. I just sprayed a decent amount of nonstick spray and let them cool for about 8 minutes before popping them out.

I love mini food/everything, too! It's all so cute!

Everything is just fabulous! Thanks for all the T-day ideas.

I love your idea of Miniature Thanksgiving! Everything looks delish!