Happy Halloween, Y'all!  I would first like to say that I have thoroughly enjoyed this month of vegan blogging.  I have a gazillion recipes to try and have made a few new e-friends along the way!  I have never felt so a part of a community before.  It feels great.

The end of Vegan MoFo feels a lot like what I imagine the end of summer camp to feel like.  Sad but memorable.  It's a bittersweet relief that I won't have to run home and construct a meal every single day, but I am happy my blogging spirit has been revived.  This MoFo feels so much better than last year.  I made all 31 days.  I stretched myself pretty far and am seriously considering a zine on cheap vegan party ideas.  Thanks for the suggestion!  I don't remember who said it (so long ago), but I like that idea.

So, a couple of years ago I made a graveyard cake for the poetry slam.  I had Sour Patch Kid zombies ripping the guts out of Gummi Bears.  Then, for Christmas I made a gingerbread house for my office.  It was on top of gingerbread cake with a lemon buttercream.  That was great.  Not so great: I got a flat on the way to work and the house pretty much collapsed.  They ate it anyway, though.

Today, I decided to combine the two and make a haunted gingerbread house.  I should have known this would end badly.  As I went to take the house parts out of the freezer, one of the walls fell to the ground and shattered.  Noooooo!  Luckily, I picked a template that had two parts to it.  So I used one of the bigger walls to create the back wall, but it was too soft.  So basically, I made a gingerbread...shack?  I dunno.  Hee hee.  Alls I know is that I'm gonna eat the shizz outta this! 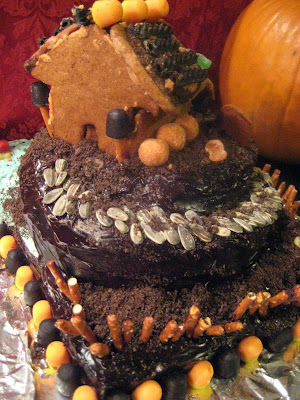 The shack on haunted hill!  Here we have a pretzel fence and sunflower seed path leading up to the shack house.  I used oreo crumbs for dirt, pretzel impaled dots for trees, and chick-o-stick ballz for bushes.  There's black licorice on the roof and the entire thing is bordered with candy corn flavored dots (ZOMG!) and black crows. 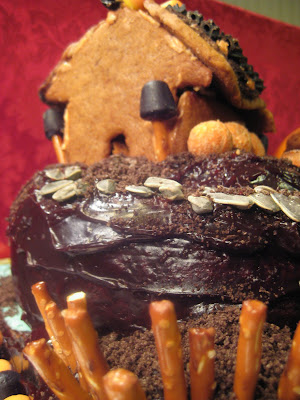 What I really wanted to do was a pig farm.  A really creepy serial killer type thing with marzipan pigs feasting on the flesh of the dead.  Muahahahaha.  Ha. 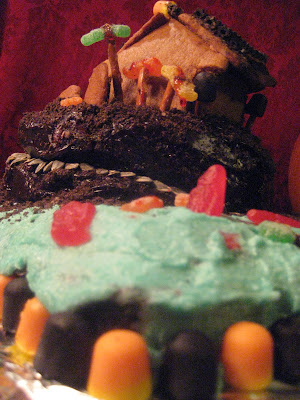 I couldn't get a good picture of this, but there was water with Swedish Fish piranhas eating Sour Patch Kids.  And tons of blood.  It's pretty hilarious. :) 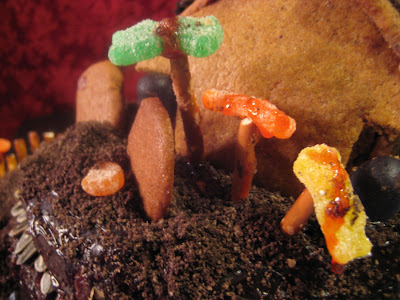 Sour Patch Kids were so harmed in the making of this.  Pretzels are really good at impaling things.  There are also tombstones, but I couldn't find an edible ink pen.  I'm just gonna call them unmarked graves.

Okay.  The components of the thing...  I made a 9x13 chocolate cake from Papa Tofu.  On top of that I set a gingerbread cake.  They were frosted with this chocolate frosting recipe.  Half of the chocolate cake was covered with VCTOTW Fluffy Buttercream (half recipe, dyed blue).  For the gingerbread, I used the PPK recipe.  That's all she wrote. 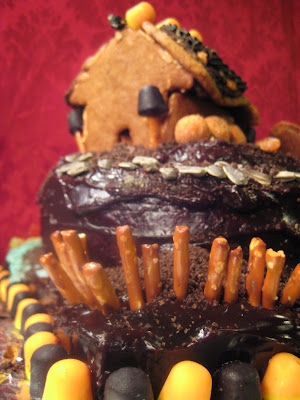 Farewell, Vegan MoFo!  I'll see you next year!  I still have a ridiculous amount of blogs to read so I hope everybody has a safe and happy halloween!
Posted by Monique a.k.a. Mo at 8:48 PM

this is awe inspiring. i love the turmoil and detail.

I am also sad MoFo is over! You were such an awesome MoFoer, I liked your themed weeks and all your posts were amazing.
That gingerbread house is absolutely stunning! I am so impressed by your skills. You are a talented house builder :D

That is one heck of a cake. Like whoa.

Woah,that is awesome. You are so creative! I love it.

hooray for all your fantastic mofo posts! i think a zine on cheap vegan party ideas would be awesome! nice job on all the fun posts, and i'm excited to try many of your recipes, too. mmmmmmm! mofo is so awesome - i am a bit worn out, but i can't wait for next year. w00t!

Wow, you are so creative!

This is so cool- I´ve never seen a haunted ginger bread house before! What an awesome idea!

I too am a lil sad that MoFo is over but we'll always have the memories :P

And you should definitely make an ebook, you are the queen of awesome eats on the cheap!

I love your blog! I would definitely get your zine!

Come on, make the zine!!! Otherwise, Mo, this house is awesome! I like the "shackness" of it all. That really makes it scary/creepy. And the pirahnas eating sour patch kids? Woooo, I'm getting the shivers!