Now For a Journey Through Time and Space

Sorry.  I've just got Vince and Howard on the brain right now.

So,  I love this time of year.  The first week of June just begins summer for me.  June 3rd is our wedding anniversary and June 6th is my birthday.  Class is about to end...and it's cool enough to be outside.  Come late June, not a creature will be stirring outside (yes, not even a mouse).  So to kick off summer, we've been putting good use to our grill and enjoying some wine, beer, and liquor.

For Memorial Day, we made Mexican hot dogs.  Our friend, Roy, introduced me to them.  Just imagine the tastiest, messiest chili dog you ever did eat!  It's so effing good I don't know that I'll go back to my standby of mayo, deli mustard, and dill relish! 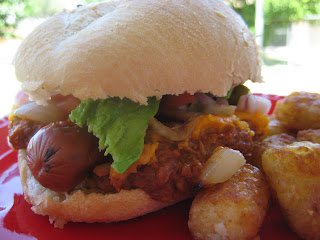 Traditional Mexican dogs are wrapped in bacon, grilled, and served on bolillos with a ridiculous array of toppings from beans to grilled onions to a variety of salsas.

The above featured wonder is gonna be a mainstay for Era and me.  I've read that these can be served in regular hot dog buns, but I recommend something sturdier.  This is so messy, we don't even pretend it's anything but a sandwich.  Below is how we built this bad boy:
We served it with tots and Micheladas.  When the drinks got too spicy for me, I just switched over to ice cold beer.  Greatest Monday of all time.

To celebrate our anniversary, we went EPIC!  Era and I have been married 4 years, so we decided to do THE RETURN OF VEGAN CHEEZE TASTING.  Not as many cheeses this time, as they were all homemade.  So maybe it was epic lite.  Haha. 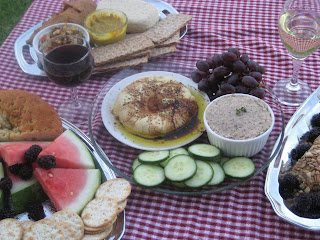 A horribly rushed shot of the table.  That wrinkle in the cloth bugs me so bad right now! :) 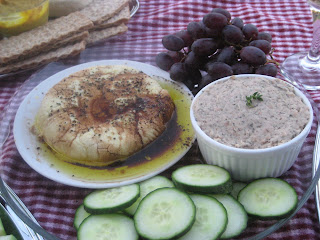 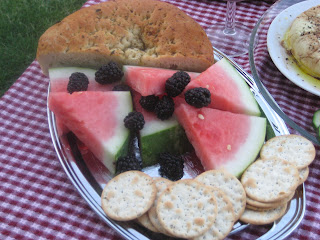 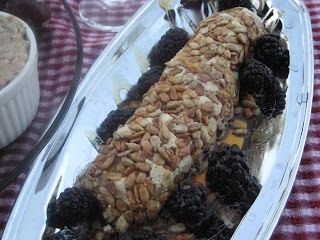 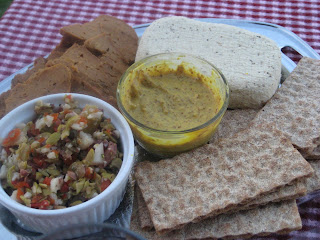 So good.  I really liked the cheddar cheeze recipe.  It was amazing with mustard and seitan.  I suggest letting it sit for awhile so the lemon taste mellows, though.
Posted by Monique a.k.a. Mo at 8:24 PM

I love hearing about summer beginning for you when we've had about 3 weeks of almost non-stop rain here!

Those Mexi-dogs look awesome! I am going to try making some, but I don't think I'll find bolillos here.

And congratulations on your anniversary! And what a way to celebrate, your cheeses look yummo!

Wow, what a wonderful spread! All those cheeses make my mouth water!

Happy anniversary and happy birhtday, Mo! Have a wonderful day.

You and you cheeses are so awesome.

I love vegan cheese tastings! The only one I have tried is the almond feta and it is wonderful. Looks like such a great spread!

So much to celebrate! Happy Anniversary and birthday to you!!!

You were busy making all of those yummy vegan cheeses. Which was your favorite?

I've never seen or heard of a Mexican hotdog. I know some people that would go crazy over that.

wish I was there!

Really looks good. Trying it my way. Love your recipes. I just add my flavor to them and chow down.

Your Memorial Day Mexican Hot Dogs look ridiculously good! And you had them with tater tots which always take anything to a whole new level of fun yumminess! :D

So many cheeses! I would like to sample all of them, please! Before I read the caption for the last picture I thought those were the dark rye crisps I've been obsessed about lately :)

Happy anniversary and birthday! The cheese spread looks really wonderful — I'm super impressed with the variety of different cheeses you put together. Thanks for sharing.

I'm so glad I remembered your Mexican Hot Dog post when it was time to make my dinner tonight. Thanks for inspiring a yummy meal!